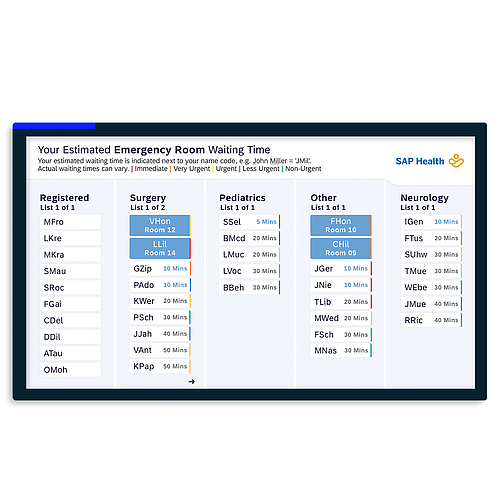 We wanted to give people waiting in the hospital a little bit peace of mind and reassurance. Being there is already stressful enough.

"Alex and I worked on the waiting time management project since its beginning. I enjoyed our work together very much. And it was great to see how much two efficient developers can achieve in a large organization. Alex is a quick, reliable and entrepreneurship-minded software engineer. I can't recommend him enough."

Waiting time management (WTM) was a co-innovation project between the SAP Innovation Center and the Helios hospital in Berlin Buch. Co-innovation means that you work with an organization that actually needs your solution. This is to ensure that projects solve a real-world problem and you have a first customer.

The goal was to build a screen that displays and predicts waiting times for patients. Patients can be sitting in an emergency department after an accident of the hospital. Or waiting for a regular appointment.

The project evolved in two phases. First, a basic prototype was build and validated with patients and doctors.

Then, we saw that it would make a good product. Development mode changed from prototyping to proper product development. Leading to a first public product release after only 6 months.

The prototype was build in Java on Netty.

After the decision to turn it into a real product, we wanted to migrate it into the cloud on AWS. It became a SaaS solution. The hospital sends us patient status update messages. We process them and display them in real-time.

AWS Lambda and the serverless framework were thus a good choice for the project. And it freed us from maintaining a lot of infrastructure.

In the back-end, we continued to use a JVM language. Scala was picked (while I would have preferred Kotlin in the JVM world).

We implemented the front-end in AngularJS.

We installed the solution in several waiting rooms across hospitals. Surveys showed that patient satisfaction in the waiting rooms increased. The project won a Red-Dot award.

If you think this can be useful for you, just say ‘hi’ via email. I will be happy to grab a coffee, talk with your or just have a short call. Let me know :) When you are in the hospital or at a doctor, it is always stressful to not know how long you have to wait. We tackled this problem for a large hospital chain with Angular and AWS Lambda Serverless. PreisGenie.de is a service that offers users Google Shopping ads at a discount. The front-end is a static website (StencilJS on CloudFront) and the back-end is using Lucene. I will build your idea

I will be more than happy to help you with your goals and projects. I have years of experience both in software engineering and on the business side. Take a look for more details.